This current blog series on Reflections is intended to encourage Christians to read more vigorously by providing a beginner’s guide to some of the Christian classics in theology, philosophy, and apologetics. My hope is that these brief introductions to important Christian texts will motivate today’s believers to, as St. Augustine put it, “take up and read” (Latin: Tolle lege) these classic books. 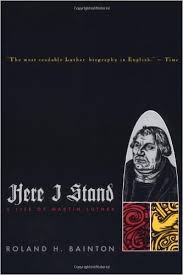 This week’s book, Here I Stand: A Life of Martin Luther by Christian historian Roland H. Bainton, is a classic biography on one of the most important figures in Christendom. October 31, 2017, marks the 500th anniversary of the Protestant Reformation, which German monk and theologian Martin Luther ignited. Bainton’s work is, in my opinion, the very best Luther biography available in English and is widely considered one of the great biographies of all time about a Christian leader.

Bainton (1894–1984) was born in England and came to the United States as a young boy. He was a church historian who specialized in the history of the Protestant Reformation. Bainton taught at Yale University for more than 40 years and authored more than 30 books. His work The Reformation of the Sixteenth Century is widely used as a college textbook on the topic.

To truly be a Protestant Christian I think one must come to appreciate the life, spirit, and beliefs of Martin Luther. Written in 1950, Bainton’s Here I Stand: A Life of Martin Luther is the definitive introduction to the great German Reformer and examines Luther’s life and times in an insightful and appealing way.

Throughout the book’s 22 chapters, Bainton reveals, in a clear and readable style, the man Luther and traces the key events of his amazing life. Bainton first explores Luther’s life as a monk in the monastery where he tried desperately to fulfill God’s moral commands for his life. He then covers Luther’s biblical discovery of the doctrine of justification by faith and his subsequent challenge to Roman Catholic doctrine and practice. Finally Bainton discusses Luther’s establishment of Protestantism as a distinct third branch of Christendom. A unique feature of the book is that it is vividly illustrated with the use of more than 100 woodcuts and engravings adopted from Luther’s own time period.

Bainton here records Luther’s dramatic words at the Diet of Worms when he is asked by a Roman Catholic ecclesiastical official if he repudiates his books and doctrinal errors:

Unless I am convicted by Scripture and plain reason—I do not accept the authority of popes and councils, for they have contradicted each other—my conscience is captive to the Word of God. I cannot and I will not recant anything, for to go against conscience is neither right nor safe. God help me. Amen.1

Christians need to know their history. And the best book to read about the towering historical figure of Martin Luther is Bainton’s outstanding biography. I wish every church official (patriarch, pope, cardinal, bishop, priest, minister) and every layperson in all of Christendom—Orthodox, Catholic, and Protestant—would read and reflect upon this remarkable historical biography.