I am writing this ongoing blog series on Reflections to encourage Christians to read more vigorously and enrich their lives with Christian classics in such fields as theology, philosophy, and apologetics. Hopefully, a brief introduction to these Christian texts will motivate today’s believers to, as St. Augustine was called in his dramatic conversion to Christianity, “take up and read” (Latin: Tolle lege) these excellent books. 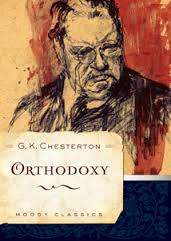 This week’s book, Orthodoxy, by English literary scholar and Christian thinker G. K. Chesterton, is considered one of the twentieth century’s classics of Christian apologetics. As a voluminous writer and scholar, Chesterton’s works significantly influenced other twentieth-century authors, both religious and secular. His provocative apologetics writings remain popular today among Christians of various backgrounds.

Gilbert Keith (G. K.) Chesterton (1874–1936) was an English writer, literary and art critic, poet, orator, journalist, and Christian thinker. The author of numerous novels, biographies, and detective stories, Chesterton was raised in the Unitarian religion before going through a period of agnosticism and skepticism. Ultimately, he adopted historic Christianity—at first embracing Anglicanism and later in life becoming a Roman Catholic.

Chesterton published Orthodoxy in 1908 as a work justifying his adoption of Christian theological belief as reflected in the ecumenical statement of faith known as the Apostles’ Creed. The opposite of a dry theological tome, Orthodoxy reflects the wit, style, and literary elegance of one of England’s greatest twentieth-century authors.

Written in nine chapters, the book reflects a sophisticated critique of contemporary Western culture. Chesterton aims to expose the rational weaknesses of such secular beliefs and philosophical movements as naturalism, materialism (physicalism), positivism, and mechanistic evolution.1 He views secularism’s broad approach to skepticism as raising serious questions about whether it can account for the possibility of genuine human knowledge and rationality.

In contrast, Chesterton presents the historic Christian faith as a mysterious yet powerful belief system that explains the world and especially man’s precarious place in it. For Chesterton, the basic framework of Christian theological orthodoxy—explained in its creeds—points in various ways to truth and reality. Thus, the Christian worldview vision succinctly outlined in the Apostles’ Creed rings true and is satisfying on various levels.

Speaking of his days as a skeptic where he sought to find the newest provocative idea to follow, Chesterton comments on the enduring consistency of Christian orthodox belief over two millennia:

I tried to be ten minutes in advance of the truth. And I found that I was eighteen hundred years behind it.2

G. K. Chesterton’s writings usher in the beginning of what would become known as “literary apologetics.” His style, flare, and imaginative storytelling as a Christian author would impact such influential Christian writers as C. S. Lewis, J. R. R. Tolkien, and Peter Kreeft. Chesterton’s clear and fresh ideas remain a source of challenge and encouragement for both Catholics and Protestants today. Orthodoxy is a book worthy of a careful read and considered reflection.

For an assessment of Chesterton’s works as an apologist, see A History of Apologetics by Avery Cardinal Dulles (San Francisco: Ignatius, 1999), 292–94.