On my Facebook and Twitter pages I have a weekly segment called Thursday Theology, where I provide quotes from important theological thinkers past and present. One historical theologian I quote often is Jaroslav Pelikan. Dr. Pelikan’s five-volume series The Christian Tradition: A History of the Development of Doctrine strongly influenced my thinking about Christian history and historical theology.

I hope Pelikan’s insights do the same for you as you consider four of his provocative quotes on theology. I’ve shared these nuggets of wisdom on social media, and will now briefly explain them for your encouragement. But first, a brief biography. 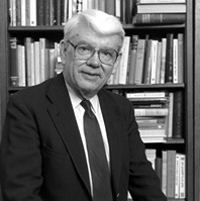 Who is Jaroslav Pelikan?

Jaroslav Jan Pelikan, Jr. (1923–2006) was an American theologian and church historian, first in the Lutheran tradition and then in the Eastern Orthodox tradition later in his life. He served as a professor of church history at Yale University for more than forty years. He held many prestigious intellectual appointments in his career such as president of the American Academy of Arts and Sciences and editor of the religion section of the Encyclopaedia Britannica. A prolific author, he wrote more than thirty books.

This aphorism appears to reflect Pelikan’s thinking about the centrality of Jesus’s bodily resurrection from the dead. I think what Pelikan means is, given that human beings are destined to die, if Christ has defeated death in his resurrection then there is no more important truth for all human beings to hear and embrace. In other words, everything pales in importance to the truth of death’s conquest. On the other hand, if Christ has not been raised, then there is no hope in facing death. Without the resurrection, death ultimately has the final say, and nothing in this temporal world has any truly enduring significance. It seems Pelikan views Christ and his resurrection as the only hope for humanity’s mortal state.

I love this quote. It is my favorite of the four I cite. Pelikan is conveying the truth that the church surely serves many important functions—a place of worship, fellowship, counseling, prayer, etc. But the Christian church must always remain at its core a school. It’s a place of learning that serves to instruct believers in the truths of the faith and helps Christ’s people to love God with both their hearts and their minds. Unfortunately, within evangelicalism today, it seems many churches do not function effectively as schools. If I visited your church, would I see clear evidence that it is also a school?

“You evangelicals talk too much about Jesus and don’t spend enough time thinking about the Holy Trinity.”3

This quote comes from a conversation between Pelikan and David Neff, former editor of Christianity Today magazine. Now I don’t know if one can talk too much about Jesus, but Pelikan is definitely correct that too many of us don’t spend enough time thinking about the Trinity. When we embrace the true identity of Jesus Christ we are also introduced to the Trinity.

Jesus’s true identity is that of the unique Spirit-anointed Son of the Father. His divine nature as the Son is shared fully and equally with the Father and the Holy Spirit. Christians confess that the one true God subsists as three distinct persons—Father, Son, and Holy Spirit. Thus, thinking about the Trinity ties us to the church through the ages, where the Trinity is reflected in the beliefs and the practices of historic Christians. Salvation has been understood to come from the Father, by the Son, and through the Spirit. Also, Christians pray to the Father, in the name of the Son, and in the power of the Holy Spirit.

“Every Sunday all over the world, millions and millions of Christians recite or sing (or, at any rate, hear) one or another creed, and most of them have had a creed spoken over them, at their baptism.”4

The word “creed”5 comes from the Latin credo, meaning “I believe.” Creeds can be found in the Bible. They generally serve as brief summary statements of essential Christian doctrine. Most Christian churches adhere to a creed, with the two most popular creeds in Christendom being the Apostles’ Creed and the Nicene Creed. These creeds are considered authoritative because they reflect—in basic form—the teachings of Christianity as found in Scripture. Pelikan greatly valued and defended the use of creeds as a way for believers to learn and confess orthodox Christian doctrine.

These quotes provide a mere glimpse of Jaroslav Pelikan’s theological insight. Arguably America’s greatest historical theologian, he was known as “The Doctrine Doctor” and possessed an extraordinary knowledge of church history. His diligence has provided all of us with plenty of doctrinal reflection today, and will hopefully continue to do so for years to come.

Are there Christian theologians that you’ve learned from? Who are they? Visit Reflections on WordPress to comment with your response.