What would you say is the most readily recognizable scientific icon? Is it DNA, a telescope, or maybe a test tube? 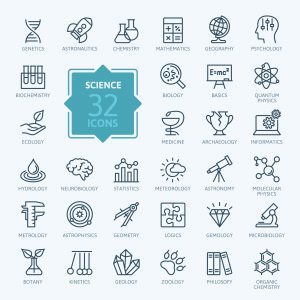 Marketing experts recognize the power of icons. When used well, icons prompt consumers to instantly identify a brand or product. They can also communicate a powerful message with a single glance.

Though many skeptics question if it’s science at all, the intelligent design movement has identified a powerful icon that communicates its message. Today, when most people see an image the bacterial flagellum they immediately think: Intelligent Design.

This massive protein complex powerfully communicates sophisticated engineering that could only come from an Intelligent Agent. And along these lines, it serves as a powerful piece of evidence for a Creator’s handiwork. Careful study of its molecular architecture and operation provides detailed evidence that an Intelligent Agent must be responsible for biochemical systems and, hence, the origin of life. And, as it turns out, the more we learn about the bacterial flagellum, the more evident it becomes that a Creator must have played a role in the origin and design of life—at least at the biochemical level—as new research from Japan illustrates.1

This massive protein complex looks like a whip extending from the bacterial cell surface. Some bacteria have only a single flagellum, others possess several flagella. Rotation of the flagellum(a) allows the bacterial cell to navigate its environment in response to various chemical signals. 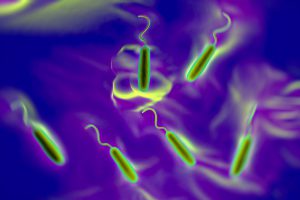 An ensemble of 30 to 40 different proteins makes up the typical bacterial flagellum. These proteins function in concert as a literal rotary motor. The flagellum’s components include a rotor, stator, drive shaft, bushing, universal joint, and propeller. It is essentially a molecular-sized electrical motor directly analogous to human-produced rotary motors. The rotation is powered by positively charged hydrogen ions flowing through the motor proteins embedded in the inner membrane. 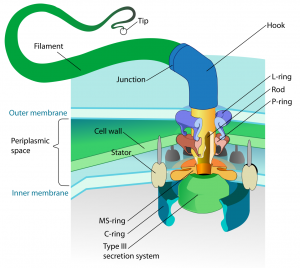 The Bacterial Flagellum and the Revitalized Watchmaker Argument

Typically, when intelligent design proponents/creationists use the bacterial flagellum to make the case for a Creator, they focus the argument on its irreducibly complex nature. I prefer a different tact. I like to emphasize the eerie similarity between rotary motors created by human designers and nature’ bacterial flagella.

Popularized by William Paley in the eighteenth century, this argument states that as a watch requires a watchmaker, so too, life requires a Creator. Following Paley’s line of reasoning, a machine is emblematic of systems produced by intelligent agents. Biomolecular machines display the same attributes as human-crafted machines. Therefore, if the work of intelligent agents is necessary to explain the genesis of machines, shouldn’t the same be true for biochemical systems?

Skeptics inspired by atheist philosopher David Hume have challenged this simple, yet powerful, analogy. They argue that the analogy would be compelling only if there is a high degree of similarity between the objects that form the analogy. Skeptics have long argued that biochemical systems and machines are too dissimilar to make the Watchmaker argument work.

However, the striking similarity between the machine parts of the bacterial flagellum and human-made machines cause this objection to evaporate. New work on flagella by Japanese investigators lends yet more support to the Watchmaker analogy.

The flagellum’s universal joint (sometimes referred to as the hook) transfers the torque generated by the motor to the propeller. The research team wanted to develop a deeper understanding of the relationship between the molecular structure of the hook and how the structural features influence its function as a universal joint.

Each FlgE monomer consists of three domains, called D0, D1, and D2. The researchers discovered that when the FlgE monomers stack to form a protofilament, the D0, D1, and D2 domains of each of the monomers align along the length of the protofilament to form three distinct regions in the hook. These layers have been labeled the tube layer, the mesh layer, and the spring layer.

During the rotation of the flagellum, the protofilaments experience compression and extension. The movement of the domains, which changes their spatial arrangement relative to one another, mediates the compression and extension. These domain movements allow the hook to function as a universal joint that maintains a rigid tube shape against a twisting “force,” while concurrently transmitting torque from the motor to the flagellum’s filament as it bends along its axis.

Regardless of one’s worldview, it is hard not to marvel at the sophisticated and elegant design of the flagellum’s hook!

The Bacterial Flagellum and the Case for a Creator

If the Watchmaker argument holds validity, it seems reasonable to think that the more we learn about protein complexes, such as the bacterial flagellum, the more machine-like they should appear to be. This work by the Japanese biochemists bears out this assumption. The more we characterize biomolecular machines, the more reason we have to think that life stems from a Creator’s handiwork.

Dynamic properties of the hook assembly add to the Watchmaker argument (when applied to the bacterial flagellum). This structure is much more sophisticated and ingenious than the design of a typical universal joint crafted by human designers. This elegance and ingenuity of the hook are exactly the attributes I would expect if a Creator played a role in the origin and design of life.

The Bacterial Flagellum and the Case for a Creator

Can Intelligent Design Be Part of the Scientific Construct?