We live in interesting times, but I don’t know if our interesting circumstances are a blessing or a curse.

As a case in point, advances in biotechnology are nothing short of mind-boggling. They seem to come right out of the pages of a science fiction novel. Take, for example, the recent creation of living electrodes by scientists from the University of Pennsylvania. These novel electrodes are made from genetically altered neurons and may one day be used to improve the performance of electronic devices used to interface the brain’s electrical activity with machine hardware and computer software.

Advances such as these hold the potential to transform our lives in ways we could only imagine just a few years ago.

In the near future, biomedical applications of these types of emerging technologies may allow us to treat—maybe even cure—diseases and disabilities for which there are no good therapies today. Yet these same biotechnologies come with complex ethical issues that should—and do—give us pause about pursuing and implementing these advances.

How do we resolve this ethical conundrum? How do we decide which biotechnologies to pursue? And for those we do decide to advance, how should we deploy them? In short, how do we ensure that these emerging biotechnologies are, indeed, a blessing and not a curse?

These questions take on real urgency when it comes to clinical uses of brain-computer interfaces (BCIs) which are already in preclinical trials. As part of this effort, bioengineers and biomedical researchers have been continuously working to improve their designs. These improvements are exciting, but they also add to the ethical dilemma, as the recent development of living electrodes attests.

Brain-Computer Interfaces BCIs are electronic devices that provide an interface between the electrical activities of a user’s brain and computer and machine hardware and software. Users learn to use BCIs to control computer software and hardware with their “thoughts.” Through the use of sophisticated algorithms, the BCIs help extract the user’s intent from the electrical activity in their brain. In this sense, a collaboration exists between the user and the BCI.

These devices hold the potential to transform medicine in exciting ways. Researchers have already demonstrated the potential of BCIs to assist patients with locked-in syndrome (due to brain injury or stroke) to communicate by controlling software. Biomedical scientists have also demonstrated the utility of BCIs to aid quadriplegic and paraplegic patients, affording them the means to control exoskeletons with their thoughts. A number of high-profile studies have also shown that amputees, likewise, can learn to activate robotic prosthetic limbs by communicating their intent to these devices with their thoughts.

BCIs are already in use in cochlear implants—returning hearing to deaf patients—and may one day be used to restore vision to patients who have lost their sight. Researchers have also explored the use of BCIs to treat dementia, Alzheimer’s, and Parkinson’s, with some interesting and hopeful results.

Types of Brain-Computer Interfaces To date, bioengineers have developed three different types of BCIs, each with advantages and limitations.

Semi-Invasive BCIs To overcome the limitations of noninvasive BCIs, biomedical practitioners have explored placing the BCI directly on the brain surface. This approach eliminates the signal degradation that occurs when the electrical activity from the brain passes through the skull and scalp. On the other hand, it requires surgery to position the BCI on the brain surface. It also requires wires to pass through the skull and scalp. Like noninvasive BCIs, semi-invasive ones can only record the average electrical activity of millions of neurons; hence, it suffers from poor resolution.

Invasive BCIs In an attempt to improve the resolution of BCIs, some biomedical researchers have directly implanted BCIs into the brain. This approach allows biomedical researchers to stimulate and record the average electrical activity of thousands (as opposed to millions) of neurons in specific regions of the brain. Unfortunately, this improvement comes with a cost. The process of inserting electrodes into the brain can damage tissue, leading to scar formation. Electrodes implanted in the brain can also trigger an immune response. And, over time, glial cells in the brain migrate to the electrodes and coat them. When this happens, it leads to loss of function.

Researchers continue to pursue ways to overcome these biocompatibility issues. One highly original approach recently explored by researchers from the University of Pennsylvania involves the creation of living electrodes.1

Living Electrodes Working with a rat model system, the Penn researchers carried out a proof-of-principle study with the hope of demonstrating they could manufacture living electrodes that could transmit electrical signals into and out of the brain. “Living electrodes” are built from genetically altered neurons and designed to respond to light. Using the techniques of optogenetics, the researchers genetically modified neurons in the laboratory, incorporating a gene into the neuron’s genome that encodes a protein that assembles into a light-sensitive channel.

Scientists working in optogenetics have discovered that once these types of inserted genes are transcribed by the cell’s machinery, the channel proteins become embedded in the neuron’s plasma membrane. Researchers have also learned that when these types of genetically modified neurons are pulsed with light, the channels open up, allowing specific ions to flow through them. These ion currents depolarize the neuron’s membranes. This depolarization can either activate the neuron or inhibit it depending on the specific identity of the channel-forming proteins. 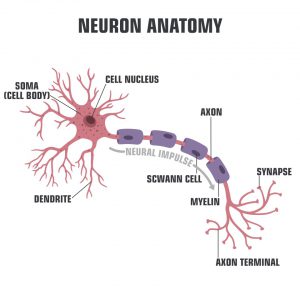 The Penn researchers produced the living electrodes by seeding one end of a microcolumn made up of an agarose gel with neurons modified to respond to light. The microcolumns were 2 to 6 millimeters in length with an outer diameter of around 300 to 400 microns and an inner diameter of 180 microns. The interior of the column was filled with cell culture medium. The researchers coaxed the axons of the neurons to grow along the length of the column’s interior, forming a mass of electrodes with the cell body at one end and the terminus of the axons at the other end. This architecture results in a living electrode made up of neurons. The researchers learned that once they had manufactured the living electrodes, they remained viable for up to 40 days in a laboratory setting.

Based on these results, the Penn researchers hope that this technology can progress to preclinical studies involving human subjects.

Bolstering the hope is the fact that these living electrodes have dramatically improved biocompatibility when compared to electrodes currently in use. In principle, the neurons used to construct these living electrodes could be cultivated from induced pluripotent stem cells derived from the patient’s own cells. This step would dramatically reduce the likelihood of the patient developing an immune response to the implanted BCI electrodes. Also, because the electrodes are made up of neurons, the connection between the brain and the BCI makes use of natural synaptic interactions compared to the unnatural connections formed between neurons in the brain and electrodes made from other types of materials.

The initial successes associated with BCIs coupled with the Penn team’s advances continue to propel us closer to routinely using BCIs to treat people suffering from disabling diseases and injuries.

Ethical Concerns As exciting as these prospects may be, the widespread use of BCIs raises serious ethical issues that we are only beginning to appreciate.2

Equitable Access As is always the case with most new technologies, there are justifiable concerns about equitable access to BCIs. This challenge already confronts medicine today, as the cost of health care continues to increase. BCIs will be expensive when they first appear in the clinical setting and, for that reason, may not be available to people in socioeconomically disadvantaged groups.

Human Identity Some neuroethicists have also raised concerns that using BCIs may lead to the loss of the patient’s individual identity. For example, use of BCIs to deliver electrical stimulation to specific regions of the brain does help arrest symptoms in Parkinson’s patients. But it also causes a change in their personality. Electrical stimulations to the brain cause Parkinson’s patients to lose impulse control and engage in risky behaviors. This change in behavior, in and of itself, is deeply troubling. But the concern doesn’t stop there. When a patient loses impulse control, it becomes unclear if these patients can truly give consent for ongoing BCI treatments. This unintended consequence observed for Parkinson’s patients raises the uneasy sense that BCI-induced changes in personality may be a much more widespread occurrence.

Some patients who have received BCI implants report that they feel as if the BCI has become a part of them. In other words, these patients view themselves as human-machine hybrids. On one hand, a patient’s sense of ownership of the BCI may be a good thing, indicating a seamless integration of the technology. On the other hand, it does raise concerns about the patient’s sense of self and loss of identity—and even humanity.

Human Agency Loss of agency is another issue. Many BCIs rely on sophisticated algorithms to decode the electrical activity in the brain and, from it, extract the patient’s intent. In other words, when a patient uses a BCI to control computer software and hardware, the affected action stems from a collaboration of the patient and the BCI. This joint effort prompts several questions: Who (or what) is actually dictating the action? Is it the patient? Are the patient and the BCI coagents? Or is the BCI the responsible agent? Would the patient have chosen to carry out that action without the BCI? Where does the patient’s intent end and the algorithm’s influence begin?

We have only sampled some of the ethical concerns associated with the biomedical uses of BCIs. This sampling should be enough to convince anyone that the ethical issues surrounding the use of BCIs—for biomedical purposes alone—are complex. And the way forward isn’t evident.

When we consider the prospects that BCIs could be used as enhancements for otherwise healthy people, the ethical concerns become amplified, forcing society into ethical deliberations for which we may not be fully equipped to engage. We need an ethical framework that does three things:

BCIs and the Christian Worldview The ethical framework that flows out of the Christian worldview meets all three requirements and can function as just such a system.

The centerpiece of Christian ethics is the idea that human beings are made in God’s image. Because of this quality every person has infinite worth and value. The implications of this idea are profound and far-reaching. This conviction serves as powerful motivation to develop biotechnologies such as BCIs with the hope of mitigating human pain and suffering, and promoting human flourishing. It also recognizes the very real potential of this type of technology to undermine human identity and human dignity, bringing a posture of caution to the table. The Christian system of ethics also posits the notion that everyone should have equitable access to this powerful technology. This ethical framework gives voice to those who are often on the fringes of society and who never seem to benefit from the latest medical advances.

It is remarkable that an ethical system that originated two millennia ago can help us today to navigate the ethical issues that arise out of emerging biotechnologies—technologies that at the birth of the Christian faith no one could have imagined.

As Christians, we indeed live in interesting times that present us the opportunity to shape the development and use of such promising emerging biotechnologies. By doing so, we can ensure that these impressive advances are a true blessing to the world—and not an unintended curse.

For a more detailed discussion of the science and technology behind BCIs and their ethical implications, along with the power of the Christian worldview to guide decisions regarding the development and use of emerging biotechnologies, check out the book I coauthored with philosopher and theologian Kenneth Samples, Humans 2.0.

Neuroscience and the Case for a Creator